The order of precedence for the rules we use are:  - Special league rules that supersede those of SPO.  - If not modified by our bylaws the SPO Handbook should be used.  - Many rules are not specifically listed in the SPO hand book but can be found in the Softball  Canada rule book, found here: https://softball.ca/resources/2022rulebook

Any ball touched by a defensive player which then goes over the fence in fair territory shall be a four base award and not considered a home run.

There was a dicussion at the spring captains meeting about the location of the pitching screen. I was asked to give a diagram that describes what we agreed on.

Below are the dimensions of the playing field that we use. There is more information here than we talked about but still worth noting.

The home plate area consists of, home plate, the wood board and the batters boxes. Although we don’t mark batters boxes the general dimesions are still good to know. 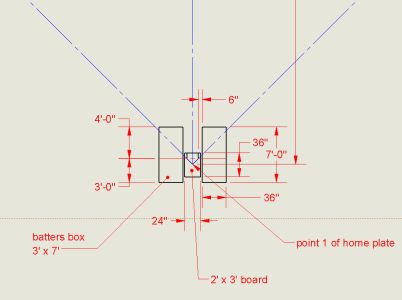 The pitching zone is a rectangle that is 2 feet wide and 10 feet long. The picture below shows a pitching screen that is set up for a left handed pitcher.

The object of this is to ensure the screen is used only as protection for the pitcher and not offer any addition defensive coverage. The screen may not have its right edge past (any further to the left) of an imaginary line drawn from point 1 of home plate to the centre of second base, the same rules apply for a right handed pitcher with the screen on the other side.

Based on the rules for pitching the pitcher must have 1 foot ( the plant foot) inside the pitching zone at the time of release of the ball.

The screen is also no more than 12” in front of the mound. 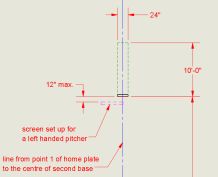 Click on either diagram to see a larger version.

I have been asked by a player about whether a runner may be tagged between the commitment line and home plate. The answer is yes, I have been in touch with SPO to find where this is printed in the rules but it is not specifically described in that way. Here is the response from SPO: Yes you can tag between the lines, it is not stated in the handbook. It is the same as tagging between the bases that is not stated in the handbook either. Tagging is allowed anywhere. This also brings up a question not asked but can happen as a result of the ability of a defensive player at home plate attempting to catch a thrown ball that is off line to make an attempt to tag the runner coming home. As a general rule if you touch home you are out. The purpose of this rule is to protect all players from injury caused by collision. There is however an instance where a runner is allowed to touch home plate - if it is to avoid a collision. This should not be confused with an attempt to avoid a tag. The line the runner describes when running home is the line he must maintain. If a play is close and a collision is imminent the runner may change their line and touch home only in an attempt to prevent a collision.

Award of bases on overthrow.  The common misconception with this rule is the old rule of “one plus one,” a rule that was changed long ago. The correct ruling is that when a thrown ball goes out of play (beyond the established boundary lines of the playing field) all runners, including the batter-runner shall be awarded two bases from the last base legally touched based on their position at the time that the thrown ball left the fielder’s hand if there are two runners between the same bases, the award is based on the position of the lead runner.

Keys to remember with this rule:

The award is based on their position at the time the throw was made, not at the time that the ball went out of play - watch for that very long overthrow from the outfield

The proper mechanics for this situation are to call “Dead Ball” as soon as the ball goes out of play then award the bases accordingly. Your award should be swift and decisive.

With multiple runners or a long overthrow, if you have any doubt consult with your fellow Umpire(s) immediately before the award and get it right the first time.

Some notes on the slo-pitch playing field:

Bases are 70 feet apart (all divisions). Doesn’t apply to our league, actual diamond dimensions used will not allow this.

Pitching Box is 2 feet wide by 10 feet long. Its front edge shall be in a line between home plate and second base and 50 feet from the back corner of home plate.

Double base shall be used at first base.